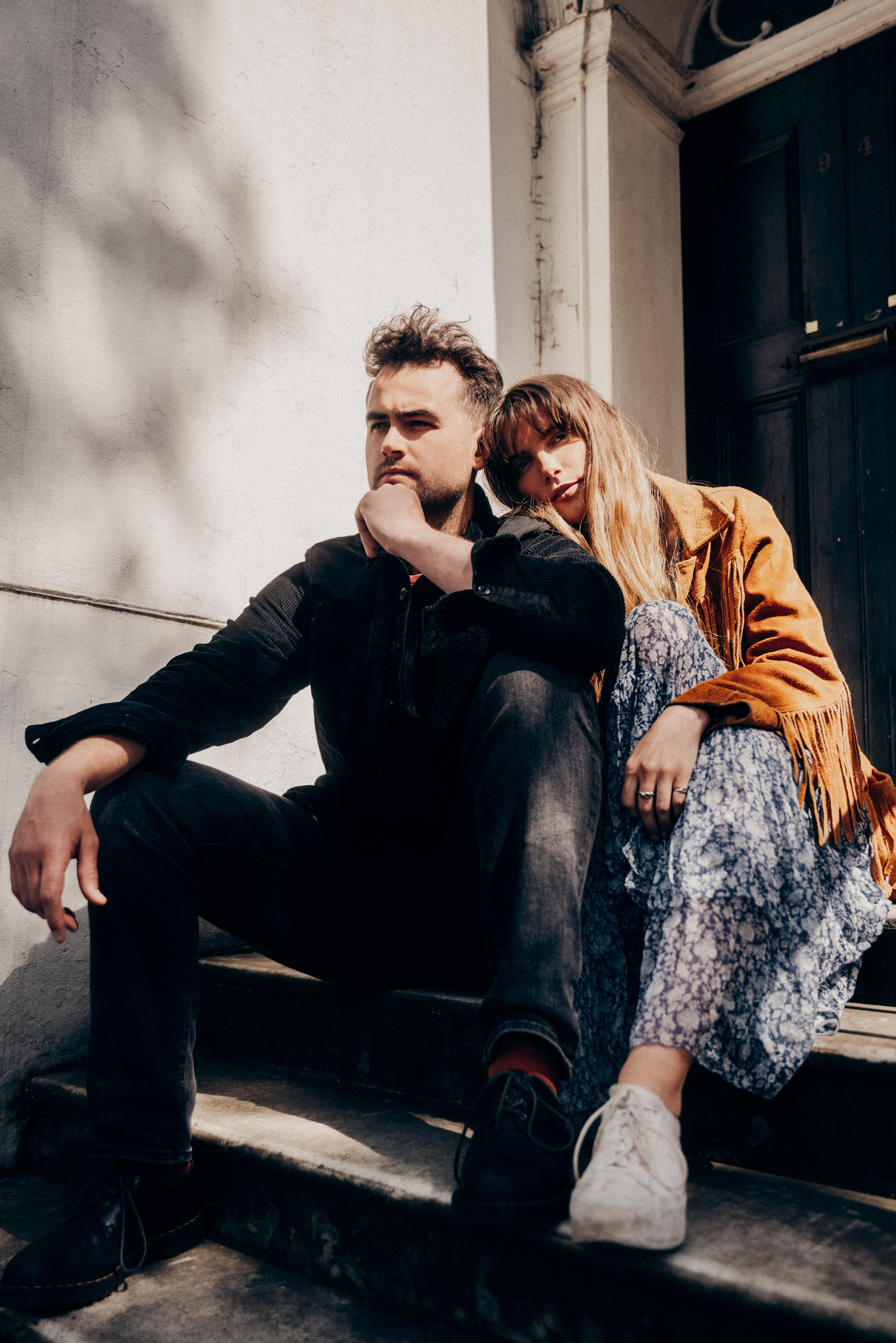 A Chat With FERRIS & SYLVESTER Ahead Of Their Visit To Liverpool

They had the best possible start to the year with an entirely sold-out UK tour back in February, and numerous performances in America including at the infamous SXSW.

The folk-pop duo have spent all summer playing festivals all over the world with barely a day off, and we’re not forgetting those incredible 5 SETS at Glastonbury!

Now we’re heading into Autumn and the pair are looking forward to playing another mammoth headline UK & IRE tour.

They’re an absolute MUST SEE this year and luckily, they’ll be heading to Liverpool Phase One on the 27th September.

GP: You played an amazing 5 sets at Glastonbury this year! How did you find it? What was your favourite moment? How does it compare to other festivals you’ve played? Did you manage to catch anyone else playing that really blew you away?

FS: We did Glastonbury!! It was the first time for both of us and that made it really special. Doing 5 sets over the weekend was exhausting and meant we were wheeling our gear around in a wagon most of the time, having people recognise us as we sweated up the hills! But each show was worth it. A huge highlight was playing the BBC Introducing Stage. It was such an honour and the crowd was amazing. There’s always so much going on at Glastonbury and we were terrified no one would show up to watch.

But people came and sang along with us, which was the best feeling. It really is like no other festival – the site is huge and there’s always something to do or amazing bands to watch. The energy of the place was on another level. Our favourite act of the weekend would have to be Frank Turner, who did two secret sets on the same stages we were playing. We’re big fans of Frank and watching him work the audience was really inspiring – also, what a nice guy. All in all, a magical Glastonbury.

GP: Your latest single ‘Flying Visit’ is angelic! What inspired you to write it? I love the ‘call & response’ especially towards the end of the track, is this something you consciously chose to implement or did it come naturally?

FS: We wrote ‘Flying Visit’ from a child’s perspective. We liked the idea of writing something straightforward and unashamed, as children are when it comes to love. There are no social politics or armour to carry around when you’re young which means you just say how you feel without being embarrassed, whether that’s simply ‘I love you’ or ‘don’t leave me’. The real message we wanted to get across is that it is ok to love people.

The call and response thing came pretty naturally in the writing. It made senses to fill the space using a nursery rhyme, ‘row your boat’ type structure that just goes round and round. It felt like the right way to end the song.

GP: You supported Billy Lockett and Wildwood Kin on tour earlier in the year. How did these support slots come about? What did you take away from these opportunities?

FS: One of the amazing things about doing what we do is we get to meet other musicians. It’s really great when the opportunity arises to tour together. We knew Billy from the festival scene and had played a few shows in Camden together a while back. It was our first time touring Europe and it was such an experience. Billy is a brilliant guy and wonderful musician. We learnt a lot from that tour. The Wildwood Kin girls were equally lovely to tour with.

Bob Harris invited us on his Under The Apple Tree tour and that opened up a totally new audience for us. It was really brilliant. Doing both tours back to back, not long after our own tour, showed us what it was truly like to tour for months at a time. At points it was exhausting, but getting to tour Europe and play every night is a total dream come true.

GP: You’ve played quite a bit in the States this year, including SXSW. What do you enjoy most about playing in the US? Was there a big difference in the American audiences in comparison to those in the UK?

FS: Americans are always up for it in our experience! Playing SXSW this year was absolutely incredible – once we got our invite, we got stuck in and booked as many shows as we could. It really felt like there was a scene in the US for our kind of music. Everyone was happy to be there and wanted to have a great time. Not to say that crowds aren’t great in Europe as well. Each crowd is different in every city, as is every show. It’s always a different experience, which makes playing live all the more fun!

GP: How is the album coming along? Can we expect any new music soon?

FS: We’re so excited about writing our album. It’s been our priority this year, whether that’s locking ourselves away for a week and writing constantly, or writing on the road in-between soundchecks and in hotel rooms. There’s a lot of new music to be excited about and we can’t wait to lay it down. We’re taking it one day at a time, but we’re getting closer to getting it out in the world. New music is coming soon…

GP: Last year you took a lot of inspiration from your trips to Iceland. What have you found to be your latest inspiration? Will you be heading off anywhere new or even back to Iceland this year?

FS: We’ve been writing a lot lately about a lot of different things. We’ve always been keen to write about the complications of human relationships, and recently we’ve been writing about the relationship you have with yourself – about understanding yourself better and finding a voice. Recently, we’ve been playing festivals all over the place and have just come back from a festival in the Faroe Islands – it certainly felt like being back in Iceland! It’s impossible not to feel inspired by the landscape of new places. Sadly we have no time to head back to Iceland this year, but we’d love to go and play out there some day.

GP: Your UK tour in February sold out! Did you ever expect you’d receive such a great response? Did you have a favourite show/moment?

FS: We did not expect it at all, we were blown away by the turn out. It was our first ever headline tour and was such a big deal for us. We’re an independent band and had worked so hard last year to generate a fanbase, but it wasn’t until the tour that we realised that fanbase truly existed. Every show was a unique experience and we took something away from each one. If we had to pick a favourite, it would be The Cavern in Exeter, Archie’s home show. We could have played for hours, it was magical in there. We can’t wait to play The Phoenix in Exeter this October.

GP: You’ve now announced a massive UK tour for September/October. What’s the best bit about getting back out there?

FS: We get to do it all over again! This one is a lot bigger than the last – we’re doing over 20 dates in the UK & Ireland and we’re going with the band. We’ll be touring a lot of the material from the album we’re working on, which feels massive. Since our last one, we’ve been writing and touring constantly, and to tour as headliners for the second time this year feels great. We’re ready!

GP: At your London show in February you had fox masks that you gave to the audience, which made for a pretty spectacular moment. What’s the story behind this? Can we expect something similar this time round?

FS: The fox masks in London was mental. The whole idea came from our music video and artwork for the song ‘Sickness’, in which we say goodbye to the ordinary and enter the wild… we decided we needed to make this a thing at our London show. Everyone was given a mask on their way in and put them on when we played Sickness. It was incredible to look out over hundreds of people wearing masks and rocking out. So weird and wonderful – be prepared for the same level of wildness this time round…

GP: What do you think will be your biggest motivation whilst on tour?

FS: Playing our new songs. We’ve really changed things up with our live set. This time, we’ll have our band which takes it up a notch. Playing new songs in a new set up feels so fresh and will keep us on our toes every night. Over the summer months, our set is short, punchy and loud in order to grab people’s attentions at busy festivals. But recently, we’ve stripped it back to just vocals and soft guitar or keys for a couple of numbers and let it just be about the song.

It’s scary and quite vulnerable but it’s a magical part to our set. We want to take the audience on a journey and bringing the set right down allows us to take it right back up and be as dynamic as possible. Doing that every night will certainly keep us motivated through the driving and sound checks! Of course, though we’ll also be really looking forward to adding the band to songs we’ve been playing for a while to bring an extra dimension.

GP: What is the one thing you want to achieve in 2019, and what can fans expect from Ferris & Sylvester this year?

FS: We want to finish writing our album. This year’s been all about the writing. Whether we feel it’s right to release it or not this year, we want to create a full body of work that we’re proud of. In the mean time, we’ve been touring pretty much non-stop. Our Autumn Tour will certainly be a major highlight. It’s been a truly amazing year so far and we cannot wait to share our new music with you all. 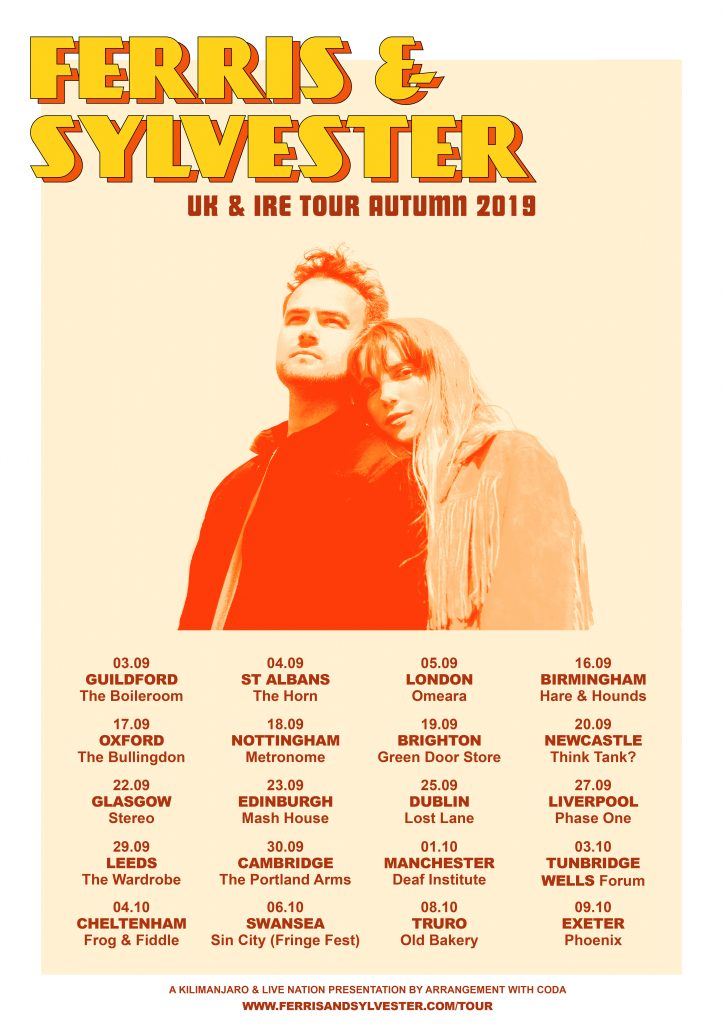 Review: Psyence at Jimmy’s
THE WHO: New Album Release and Liverpool Gig Details