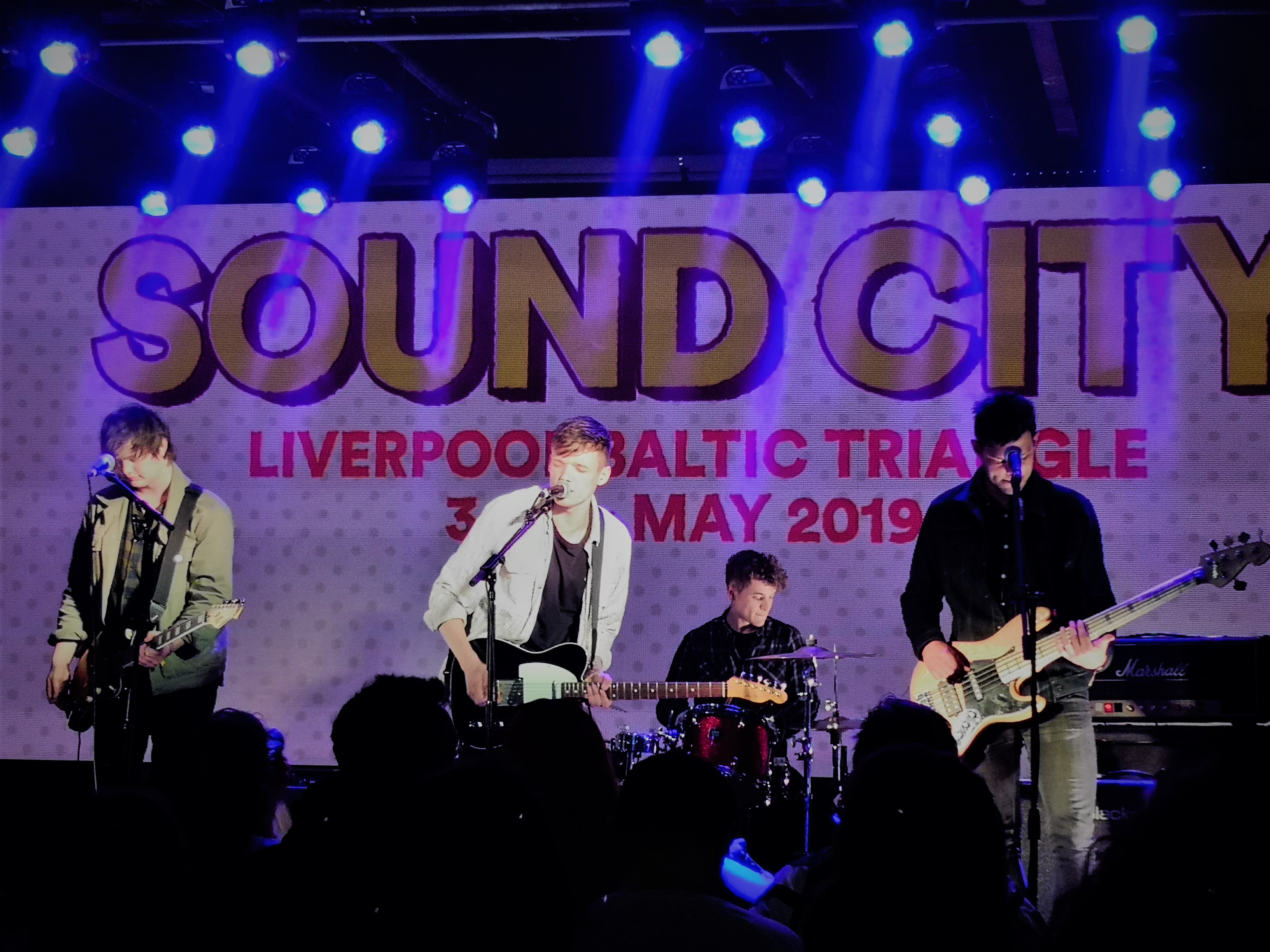 We have been covering the Sound City festivals for a number of years, from the early days when it was located across Liverpool city central venues, then the slightly experimental move down to the docks, only seeing it return after a few years back to the Baltic Triangle area of Liverpool.

So we have experienced the festival in different formats, and we were very happy to see it back in the Baltic area after the success Sound City 2018.

For me personally, Sound City is all about discovery of new music. The superb headline acts will always sell the tickets and draw the big crowds, but I have stumbled across so many great ‘less known’ bands in previous visits to the festival, my plan for the day would be the same.  Roam and discover. And that is one of the things that makes Sound City such a great festival to attend. The freedom to wander around and visit different venues, get a change of scenery and soak up a new ambiance is brilliant.

With that said, my first port of call was the Modern Sky label party down at District, their roster includes the likes of Red Rum Club, SPINN and the Tea Street Band. With the New Bird Street outdoor stage located right next to District, it provided a perfect central hub of music for the festival visitors.

First up on the Modern Sky stage was Abbie Ozard, a first for me to see live and my only disappointment was the fact I hadn’t seen her sooner. Melodic rhythms and beautifully toned lyrics entwined in a whole world of dreams. A perfect interpretation of Chris Isaak’s ‘Wicked Game’ put the hat on a gorgeous set.

I caught half of the SPQR showing. Bags and bags of energy, led by the frontman who absolutely loves the music, and that’s what you want when you see a band live. A group of people who adore the sounds they create, because every time that will make for a great gig, and people will lap it up, and today they did. Great set & sounds from SPQR.

Natalie McCool is an artist I have had the pleasure of seeing a few times and today as ever she was in great form. It seems to me no matter what Natalie sings, what new tunes she brings to the party, they always have her distinctive passion for lyrics, songs that stay in your head and she always manages to match her songs with a top performance. 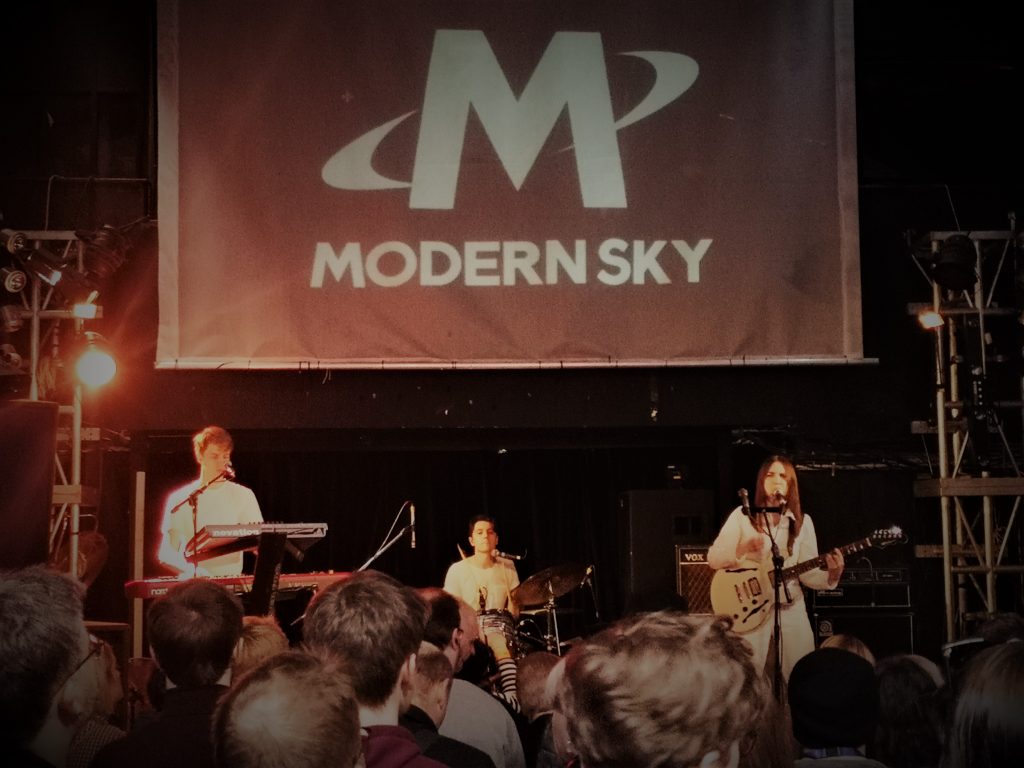 Constellations and Constellations Garden was next on my list. I ventured to this venue last year and had a wonderful time (plus beer in the sunshiiiiine) so I was keen to get back to see what they were offering this time.

I dived into Constellations as I heard music leaking out onto the road on my arrival, alas I just caught the last tune from Oddity Road, the guys seemed to be enjoying their set, loud and full of beautiful clean riffs. Sorry I missed your set chaps, but we did make you our featured photo on the review to make it up (a bit).

Constellations Garden was filling up nicely, and with the sunshine coming out to play, it was a real Sound City moment. People enjoying the venue, music and the urban outdoors. 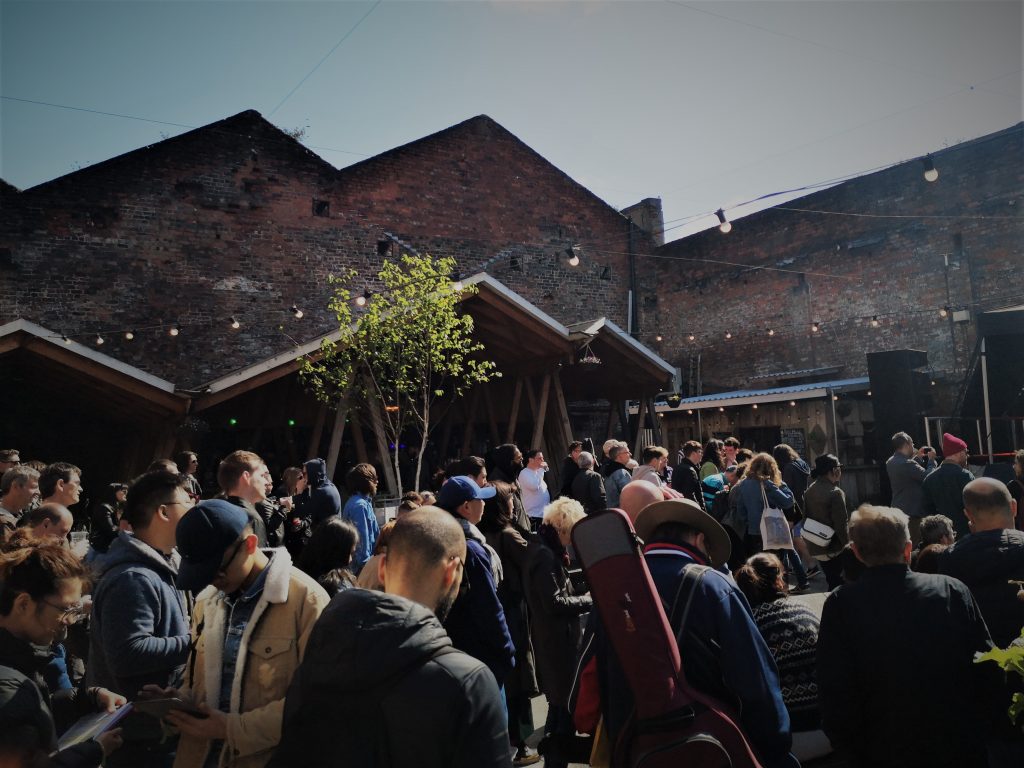 I mentioned at the start of this article about finding new sounds at the festival, well this year delivered the goods. Up on the Garden stage was a South Korean band called Dabda, and for the love of all things great, they won me over within minutes. When you get energy, rhythm, beats and undiluted talent on a stage, all cooking at once, there is only one real winner – you! And I indeed did feel a lucky bastard to be stood in the sunshine, soaking up the sounds by Dabda.

A psychedelic barrage in parts, calming waters in the rest. 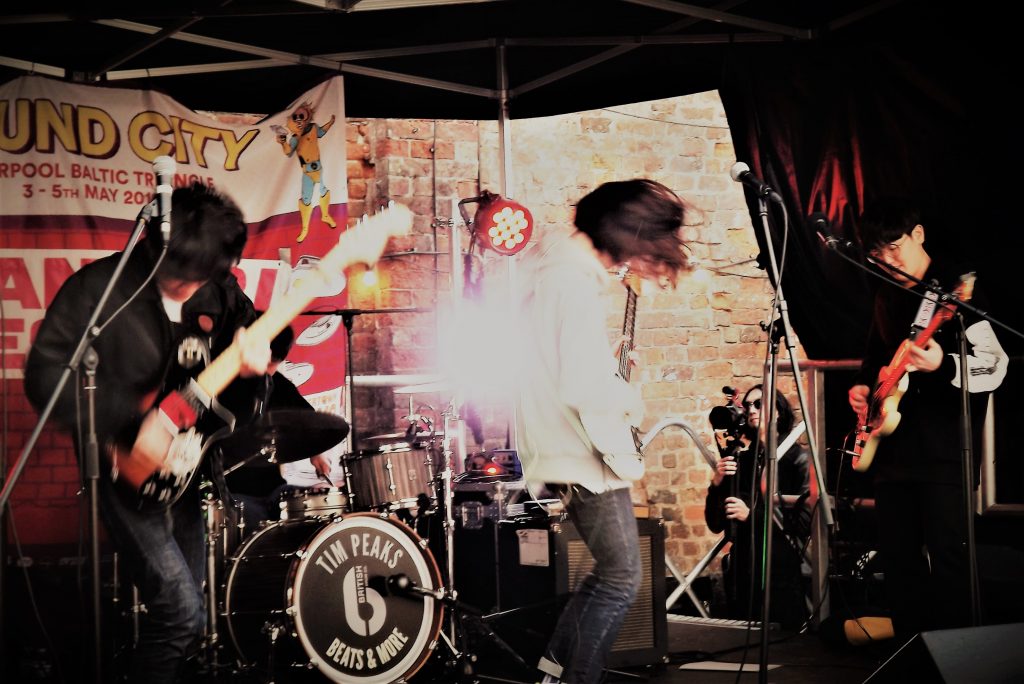 The Florrie Guitar Group also featured highly on the Constellations Garden stage and once again we had another Sound City moment. A group of people, of all ages, all learning the guitar together and now playing live in front of a big crowd in a city festival. Playing a set of known covers, the Florrie really created a high point of the day with everyone singing along – brilliant. 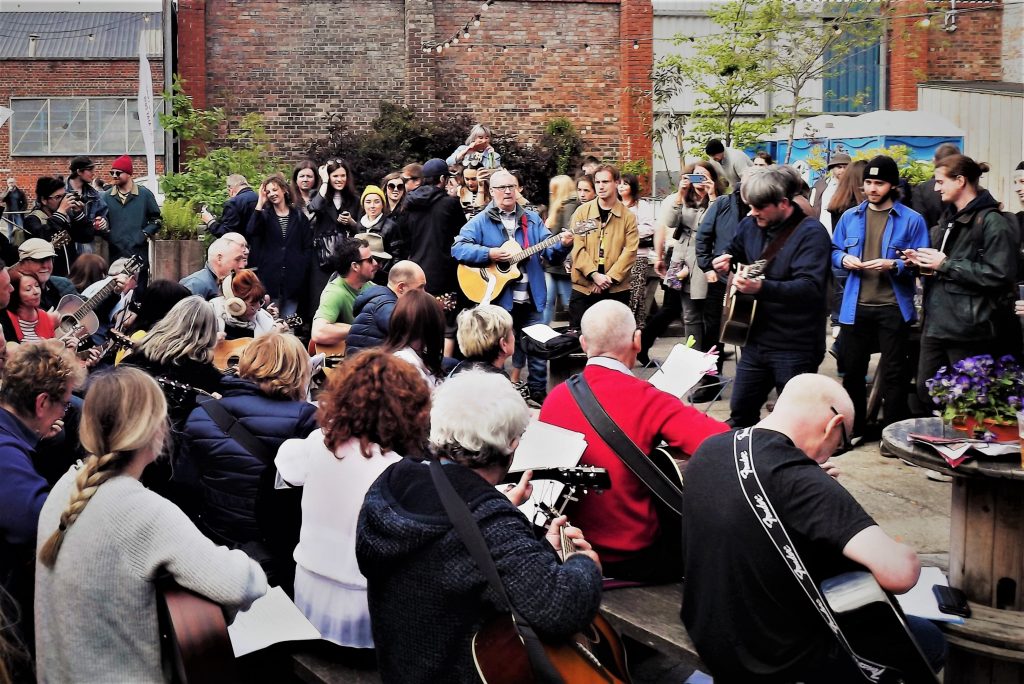 Over at Brick Street Gardens I was in for another musical treat when Calva Louise took to the stage (I think they are also signed to Modern Sky). This power punch trio gave us everything we ever wanted from a live performance. The lead guitar/singer was full of screams and defiance – she absolutely owned that stage. The band create a sound verging on a number of genres such as Punk/Rock, but to be honest I think they have their very own genre. See them live ASAP. 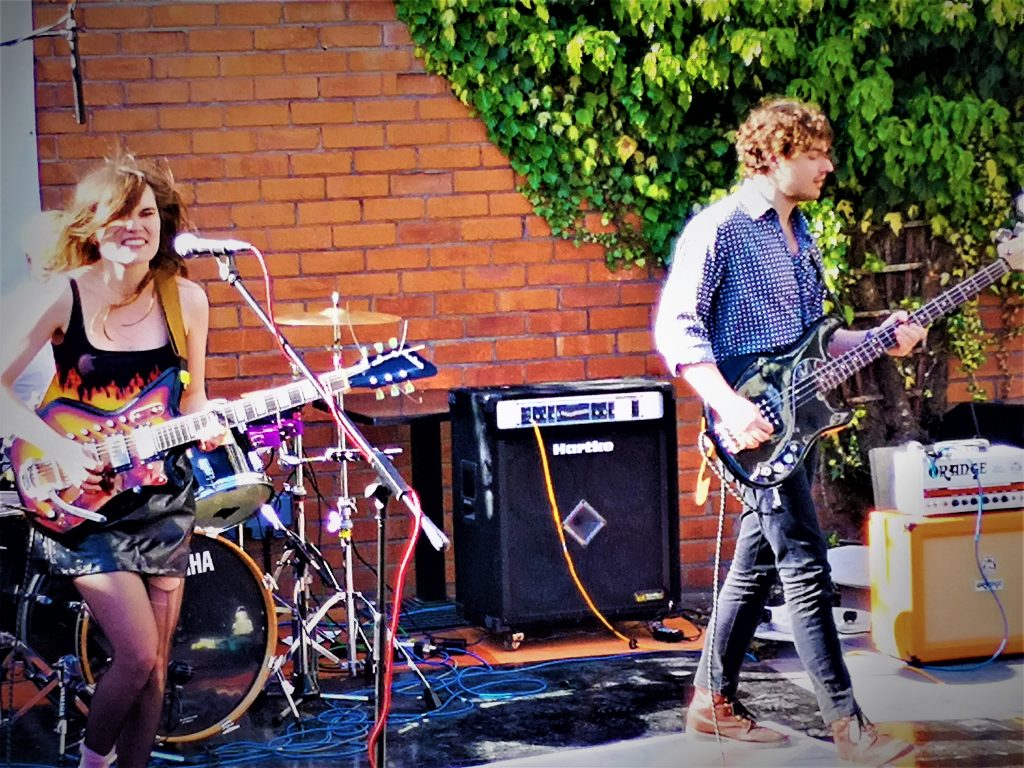 I wandered over to DITTO Coffee, which was stacked high with people, in and around Brick Street and took a swerve into the Hobo Kiosk. Sound City 2019 looked good, the location works from a perfect industrial backdrop to the ease of getting around the venues and of course the music.

I hope Sound City 2020 keeps its residence because I want to come back next year, I want to head back and find sounds that I will take away in my head and play over and over again. 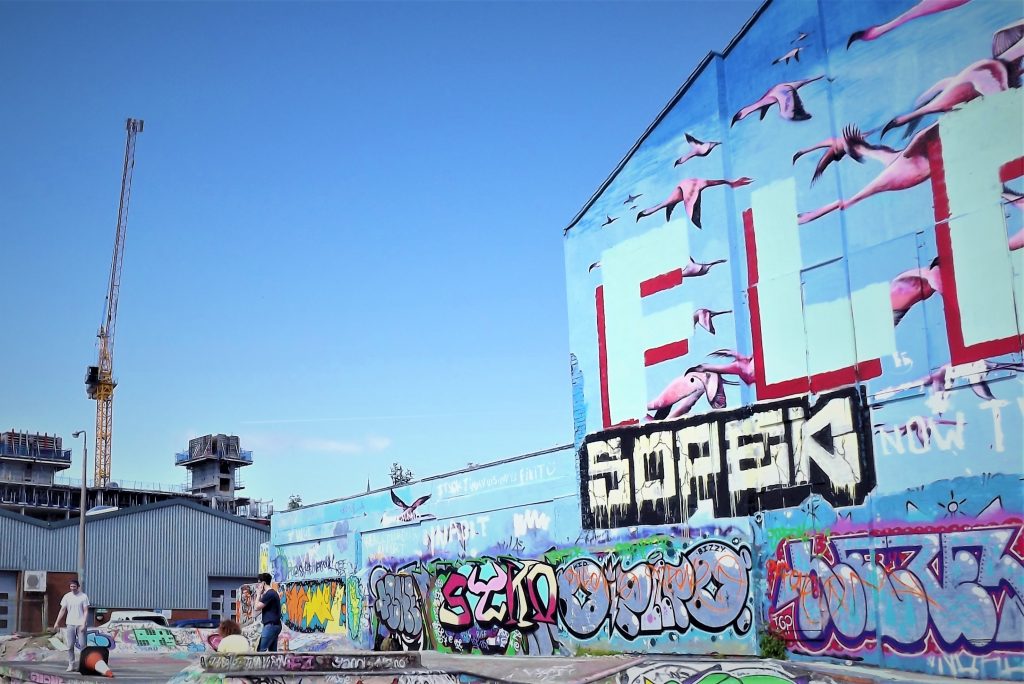 The Skaters at Sound City 2019