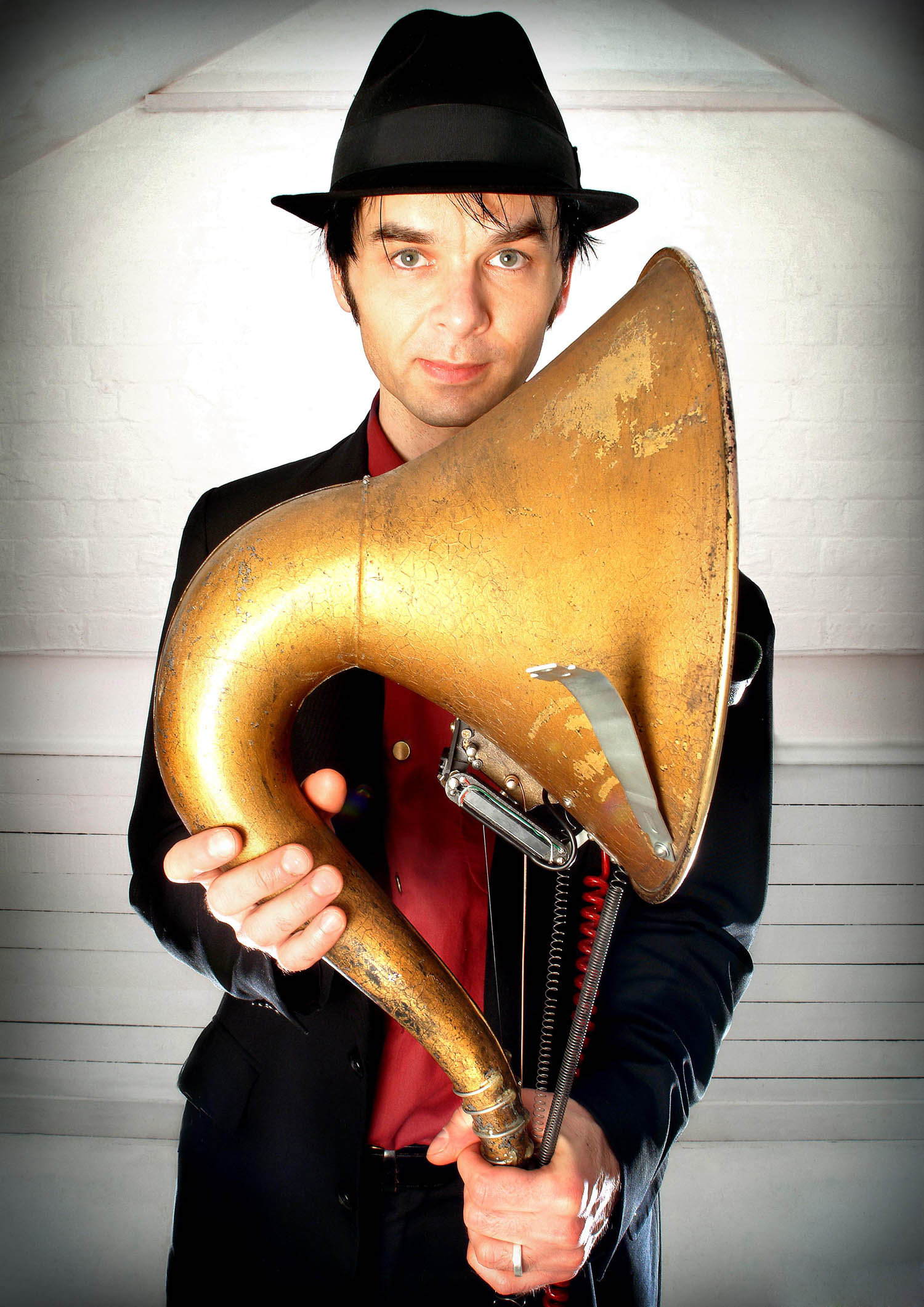 Halfway through a one month tour of the UK we catch up with the brilliant Thomas Truax. Due to the sad closure of 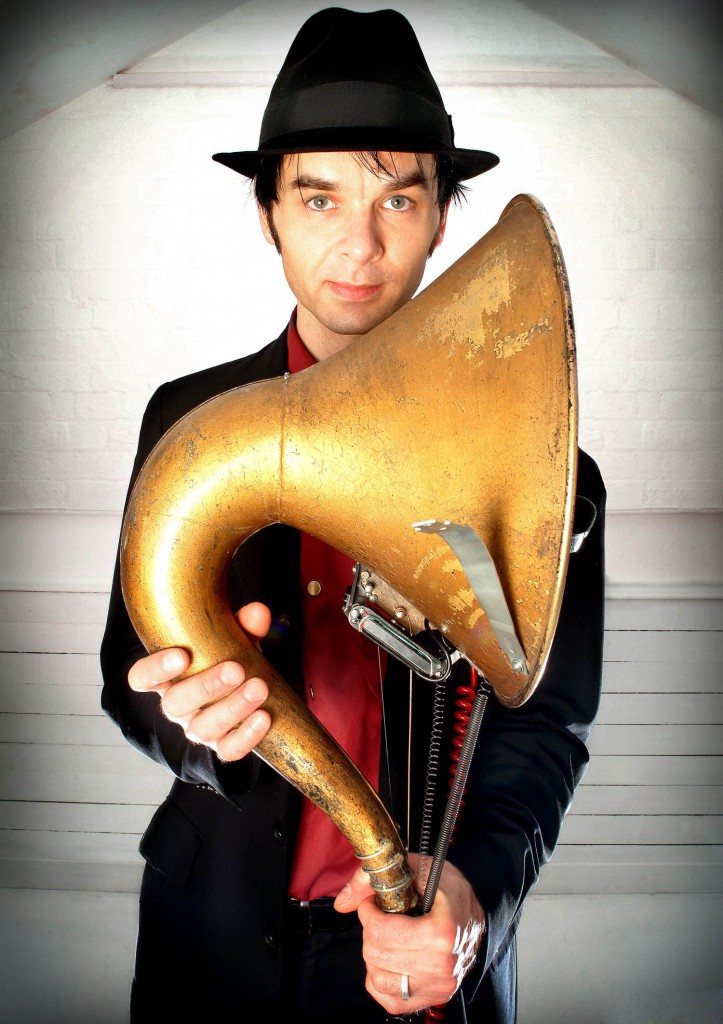 Mello Mello, Thomas Truax will play a fastforwarded opening night at DumBULLs (Fri 3rd October), the latest project from the (Don’t) Drop The Dumbells collective. A new space in Dublin street, close to the Stanley dock area, the building is owned outright by Drop The Dumbells. The Bull pub has been a well known Liverpool landmark over its 140 year past. The street was immortalised as a backdrop to Barry Feinsteins photographs of Bob Dylan when he visited Liverpool in 1966.

Song-writer, inventor, animator, performer and possibly a bona fide genius. Thomas Truax has been performing live with his invented instruments for the last 15 years, from New York to London and now living in Germany. He has released 7 albums, including an album of interpretations of songs from the films of David Lynch, with whom he shares the same fevered imagination. His music is quite otherworldy, including looped electronic and organic sounds, surreal lyrics and imagery. His live shows break down the barrier between audience and performer, with Thomas playing in the crowd unamplified, leading groups of the audience outside the venue to see him play and introducing the various invented and mechanical instruments as you would real-life members of a regular band. It is safe to say you may never have seen anything like this before.

How would you describe yourself to those who haven’t yet had the pleasure of hearing you?

I’m a song maker from New York City and have spent a lot of time in a place called Wowtown but currently reside in Germany. I write and perform songs using a collection of self-made inventions which may or may not be called ‘instruments’, as well as some more standard gear. I have some history as a stop-motion animator (most notably on shows like MTV’s Celebrity Deathmatch and Cartoon Network’s Robot Chicken) and a fascination with moving parts, and things that want to get out of skips and make noise, which I keep an eye out for and try to rescue. I try to avoid labels like one-man-band but if someone hears of me as that and it ignites their interest enough to check out what I do then I don’t object.

You take a really interesting approach to instruments and sound. Some of the things you make don’t seem like they lend themselves to songwriting, but then just fit perfectly.

I just always had a hypersensitivity to sound and sound making things. Music could either be poison or a stairway to heaven.  Or both at once, as in the case of ‘Stairway to Heaven’.  As a child I liked to strum and pluck the springs on the underside of the bunk bed above me, I reckon I wrote whole spring symphonies that way, whilst simultaneously driving my brother (who was trying to sleep up there) to the madhouse. My lifelong fascination with springs is still probably evident, there are some on the Hornicator.

You said you don’t like to be defined “just” as a one-man-band, but why did you stop being in bands and start playing alone?

I definitely was a little burned out by the band thing, I guess I did consciously think a few times how nice it would be if somebody else’ headache didn’t mean you had to cancel an important gig or a member going off to college would mean back to square one again.

I never thought I’d enjoy being a ‘solo’ artist, but I’d never done an open mic before and I thought I eventually had to do it just to see how it felt, kind of as a rite of passage,  so I did the famous ‘Antihoot’ one night in NYC at a place called the Sidewalk Café. It was rough, I thought I played terrible and that that would be the end of that, but (promoter and anti-folk pioneer) Lach seemed to think otherwise and immediately offered me a gig.   Since gigs in New York City don’t usually come at you like that, I agreed, and then thought what the hell have I done?  I really didn’t have any other solo acoustic songs down yet and didn’t know how I’d fill up the half hour time slot. But I had been working on the Cadillac Beatspinner Wheel, which I had envisioned originally as something I’d employ in a band situation. I had practically abandoned it because it just wasn’t coming together
without falling apart, but I decided I’d drag that along and play some old stuff I had with that as my ‘drummer’.  I made flyers that billed it as an “Experimental Electro-Acoustic Rhythm Contraption and Romantic Song Demonstration”.

OK, that sounds a little like how Bob Log III started out. He got the gig first and built the drum kit and 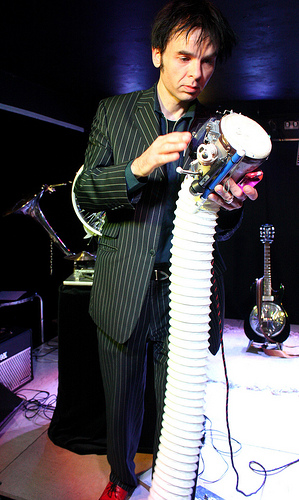 helmet mic second. How did it go, for a first gig?
Well, once again I thought as I was playing that this is really an embarrassing disaster.  The machine was indeed not behaving at all, pieces actually fell off and flew at the audience at one point and the rhythms were fluctuating all over the place.  But in the end, to my surprise, it didn’t seem to matter to the audience- they seemed to be entertained whether it was working or not!
That was really the turning point for me where I realized I was on to something appealing and a little different, and that really stems from just having let my imagination run wild instead of trying to do it the old ‘tried and true’ way.  It’s a lot more fun for me and whoever has to suffer one of my performances.

Can you introduce us to some of your instruments? They all have names and a lot seem to have personalities too. The Hornicator, based on an old gramophone horn is probably the most iconic of them.

It starts with voice and a resonator guitar called Hank.  We’re backed up by Mother Superior, my invented mechanical ‘drum machine’, which, like most of my instruments, has taken on a personality of her own, and actually I think of her as a member of a band I have. It’s friendlier and more comfortable that way. The Hornicator is the other core member.  Fans actually leave notes for my instruments sometimes, and ask for pictures of them, sometimes without me, which means they do have their own pretty strong personalities. They’ve taken on lives of their own. Once I found a note left for (drum machine) Sister Spinster that was a marriage proposal. Jealousy happens. It can be a real soap opera sometimes.

There’s a little bit of a revolving cast around the fringes. There’s the Stringaling, the Backbeater, Mary Poppins. They’re the ones that may or may not appear on any given night. I’m always working on new things, but they are born very slowly, as they must go wrong many times before they go right.

Do you ever think you’re taking second place to the things you’ve created? Like the ventriloquist dummy Hugo in Dead of Night?
Absolutely, but since they came from me initially I can stand to step back like the proud parent. “Can you stand out of the way Thomas I’m trying to get a photo of Mother Superior”.  A ventriloquist dummy is a good analogy with the Hornicator.  He sits there on my shoulder and we have these personality interactions. He steals my phone at night to leave posts on twitter that seem to hint I treat him poorly, which of course is absolutely untrue.  (That suitcase I lock him in when we travel is well padded!).  Our common goal is to entertain.

What about the light-up bee glasses you wear for the song “Beehive heart, where did you find them? They’re fantastic. I’m guessing they came after the song rather than inspiring it?

The glasses came before the song actually. I made them out of a pair of hand fans, similar to the one I play my guitar with during the ‘Butterfly and the Entomologist’ song.  I wanted to try a similar technique making sounds through the Hornicator.  When I tried it, especially with the two fans going, it sounded like a buzzing beehive.  So that was the birth of ‘Beehive Heart’. Since both hands are already occupied with the Hornicator I had to strap the fans on my head. Though a bit dangerous, it was only natural that they should go on over my eyes.  Then I thought it’d be great if they lit up. It’s all just a gradual process of coming up with something. It’s how I work a lot, building instruments or contraptions and songs and maybe even thinking about how it’ll all work in a live performance as well, all at the same time.