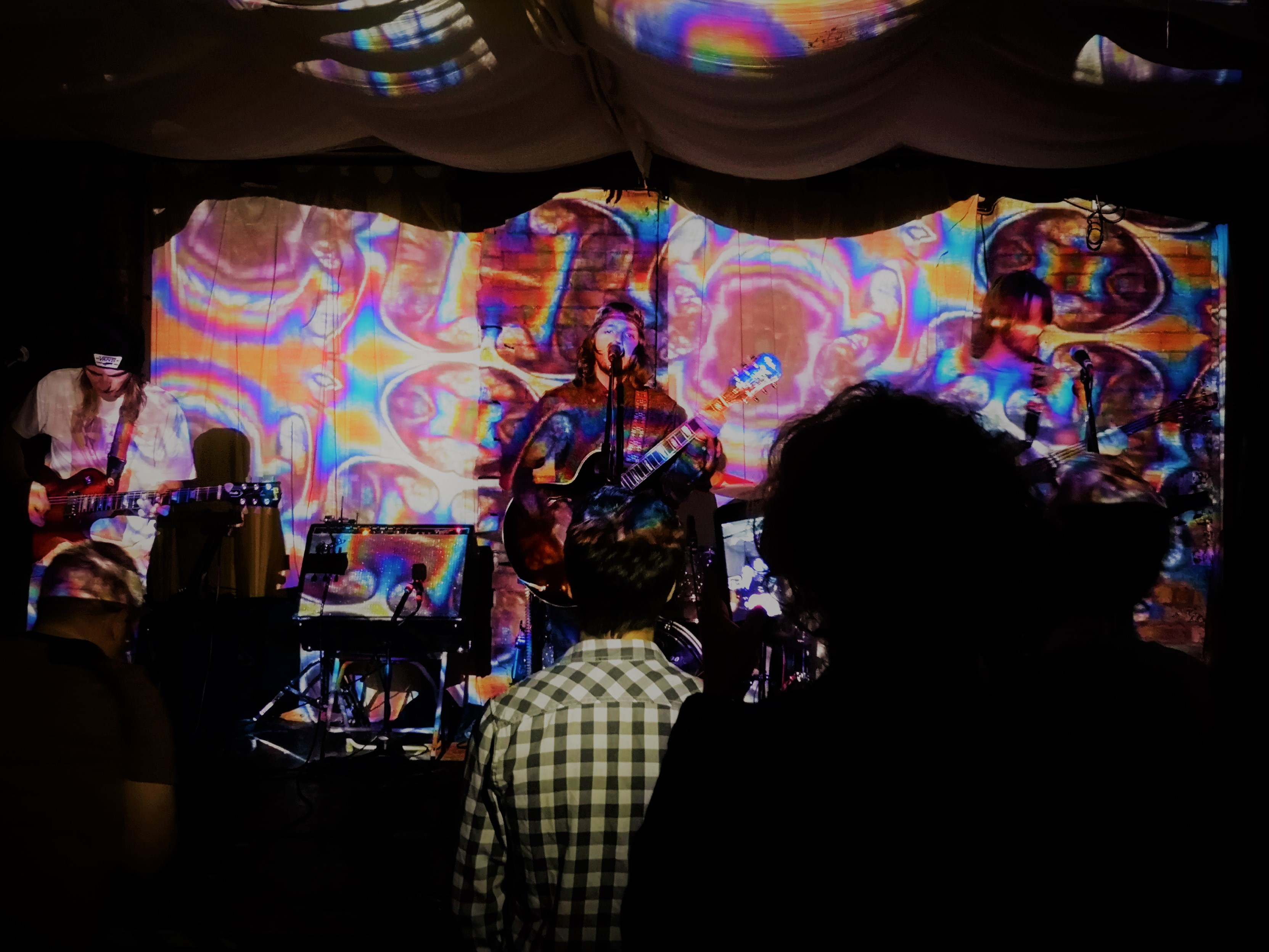 Nestled down on the lower end of Seel Street in Liverpool you will find Phase One. A venue within a venue, a gig venue, record store, bar/restaurant from the same people behind The Jacaranda, Heebie Jeebies and EBGBS. Tonight it was hosting a Softlad Promotions evening featuring San Pedro’s Vision who were also releasing their mini E.P: Twilight Of The Elephant Gods.

As ever with a Softlad Promotions event the support was strong and featured bands from Scotland, Manchester and surrounding areas.

I arrived halfway through the first band on, Callow Youth. A Manchester Indie/Pop band full of rhythm, energy with a fresh faced lust for life. Really hooky, clear as you like beats always working their way to that power chorus. Each Callow Youth song seemed to have a kick and give you a little push back on your heels. Nice big songs, ‘All I dream'(?) being a highlight in the set. Would watch again (a full set next time).

The venue filling up with passers by who were keen to investigate the sounds spilling out of the open doors and loyal band followers who had made the journey out tonight, the next band up quickly took to the stage to get in front of the growing audience.

The Lutras are a band of cheeky chaps from from Dumfries, Scotland. You wouldn’t leave them alone in a room with an unlocked drinks cabinet. I like my music with a bit of Rock and a good helping of Roll, mixed in with a massive dollop of good hearted attitude, so the band immediately caught my attention when they opened up with their first track. 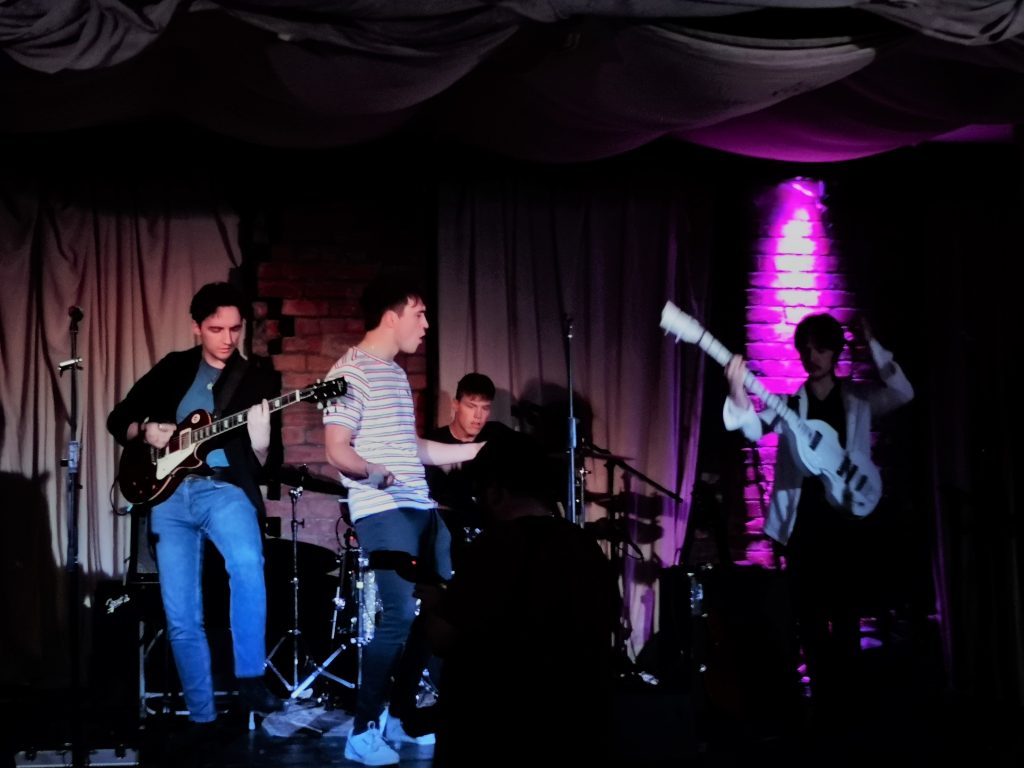 The Lutras at Phase One

The Lutras armed with a bass & guitar player loaded with 70′ rock spirit, a drummer who takes no prisoners when finding his beat and fronted with perfectly fitting vocals and lead performance.

I bloody loved The Lutras.

After a few tech issues with a stubborn guitar lead, the band played a great set, ‘Playing The Game’ being a highlight (get this released on single lads). The Faces, Rock & Roll, good times for your ears.

Next up were a band called Kez, their first gig of 2019 and you couldn’t really tell at all. No ring rust here, sharp, happy to entertain and most of all loud and rather excellent. If you like your noise to shake your soul with rock/punk, dipped in Seattle sounds – Kez is your band. 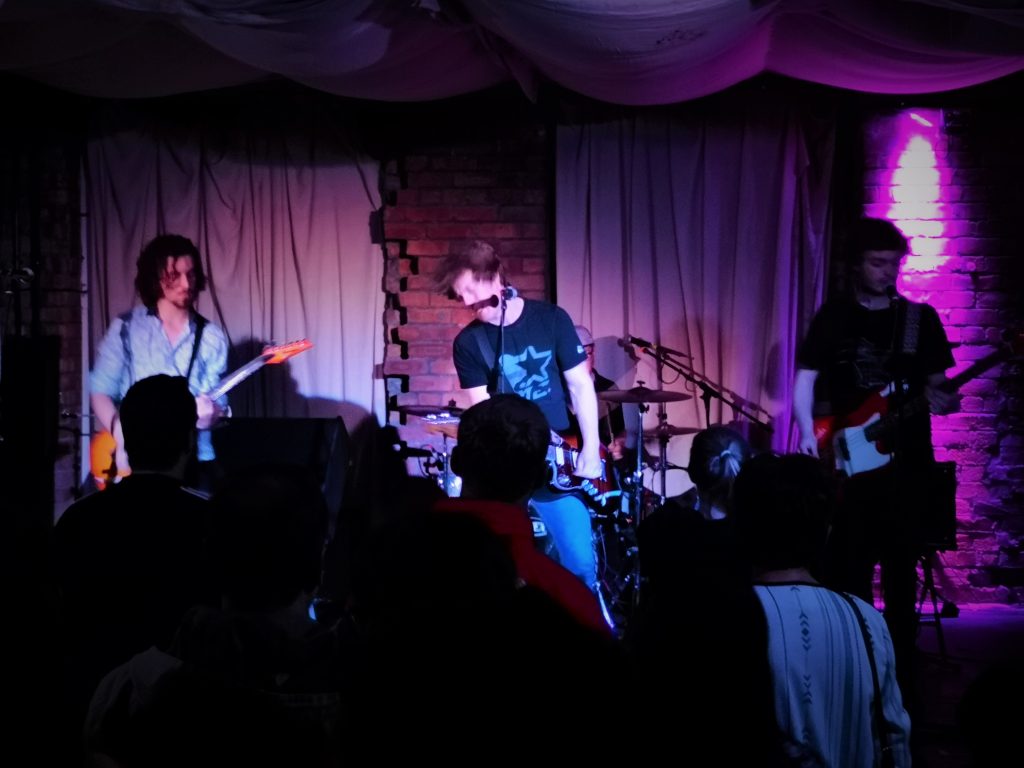 Kez at Phase One Liverpool

Plenty of support here tonight for this brash four piece with pockets full of hook, brilliantly fronted with a lead who wasn’t shy in getting his songs across every way he could. A shout from the crowd of ‘take your top off’ instantly triggered the vocal to remove his top to reveal a slightly white, but still ‘gym’ed’ body. Great tunes from Kez, check them out.

Already three good bands on this SoftLad Promotions night at Phase One, so now it’s onto the main attraction, San Pedro’s Vision to top off the night.

San Pedro’s Vision are a psychedelic rock band hailing from the Wirral and tonight was their mini E.P launch – Twilight Of The Elephant Gods.

Sometimes I find the ‘psychedelic rock’ genre tag a bit vague, often bands use it when they just don’t know what the hell they are and don’t want to be just a rock band. But make no bloody mistake my friends, these boys are bonafide, unadulterated psychedelic rock. You’re going to ‘get down’ to San Pedro’s Vision’s sound not matter what you love.

As well as the sound the band also have ‘the look’, drenching the stage with psychedelic visuals that really kicked in the vibe even before a note was struck. The band just took the night to another level. The air was filled with psychedelic rhythm’s – how refreshing to see a band fully committed to their sound and creating an ambiance to enjoy their music.

All the band fully lodged in the groove, immersed in their world – a quality performance from San Pedro’s Vision. Clever songs, thoughtful songs, tunes that you could listen to a few times over and hear things you hadn’t before. Band influences will be compared to the likes of The 13th Floor Elevators, The Grateful Dead, parts of The Coral, they even have a Kasabian feel, but sometimes I think there is too much looking back and comparing bands. This is the sound of San Pedro’s Vision, I can’t think of many others currently doing it much better right now.

With a set full of mind bending tunes, ‘Lonely Tales’ being my highlight the band are heading the right way up. Check them out on Spotify, buy their E.P, go out and see them.