After listening to two of the first tracks by Liverpudlian quartet Go-Fiasco, I was left thinking about 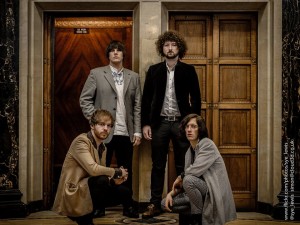 the futility of categorising music into genres. The self described ‘sludge-pop’ band show features of psychadelia, pop, progressive rock, classic rock and at a push, punk. The wide range of influences is more evident in ‘Meet My Mystery’ but works much more successfully in ‘Heaven’ where they are brought together in a smoother way.

In fact, ‘Heaven’ is a rather perfect culmination of the afore mentioned styles of music. As a first time listener, I found myself waiting with much anticipation during the slow first verse, hopeful that the powerful vocals of Daniel Duggan, which held so much promise, would build up to something more gripping, and more likely to make me want to stay for more. I was right to have been hopeful. As soon as the chorus begins, everything comes together perfectly and the song reaches a somewhat psychedelic climax. It sets the mood for the song and keeps listeners absorbed until the end.

Though ‘Meet My Mystery’ could easily be a remix of three different songs, all elements of it show absolute talent and promise for this young band. Much the same as ‘Heaven’, it is a successful indication that Go-Fiasco would be a fantastic band to see live. The recorded songs alone work as an impressive form of escapism; so are bound to be even more impressive live, in a setting where daily life always seems mundane in comparison.

In fact the band is embarking on a three month tour beginning on the 21st of February, and if their recorded songs and the words of critics are anything to go by, it will be a tour worth going to.

A lot has changed for our ‘Silent Sleep’ since we…