If you’ve ever wondered what the lovechild of Dave Grohl’s vocals, Alex 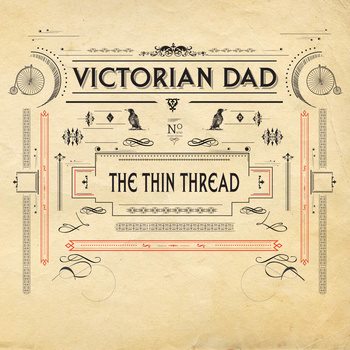 Turner’s lyrics and the Traveling Wilburys’ instruments would sound like look no further. I don’t know how we’d make this musical 3-way work but Victorian Dad, apparently, do. I feel bad comparing them to other bands because it’s just not that simple, I don’t even know what to call it. A quick trip to their Facebook page (I’ll put the link at the end, calm down) left me in confusion; I had no idea what to expect from this band from Wigan (their Facebook also gave me their hometown – knowledge). Rather than try to work them out I thought I’d just listen to their album “The Thin Thread” on Soundcloud (link also at the end people).

The album is 58 minutes long with 12 tracks. This got me thinking straight away. After a quick use of the calculator app on my phone I figured out that, on average, each song would last 4.83 (continued) minutes; not that I’m obsessive or anything. I’m a bit wary of songs lasting longer than 4 minutes because they tend to go on for about a year, but David Rybka’s voice manages to make the songs seem a lot shorter. I don’t know how he does it but it’s hard to remember exactly how long each song has been on for. I think it’s because he has the ability to sing in different pitches, tones and volumes; hence the whole Dave Grohl thing earlier.

The first song, Owner Of (That Kind Of Heart) (10 points for having half the title in brackets – love that), opens the album exactly how it needs to be opened. When listening to the album you need to understand that whatever you’re expecting Victorian Dad to do, they’re not gonna do that. The riff at the beginning of the song is interesting as anything. It’s definitely the highlight of the song.

By the second song, Satisfaction Of Cause, you start to realise that Victorian Dad love a good riff. So do I, so that’s good. Rybka’s vocals shine again, but the backing vocals are the highlight of this track. I mean, when Rybka sings “feels like I’ve been dragging my soul”; it’s hard not to get shivers. Powerful stuff. Still though, the backing vocals make the song what it is: different.

If different is what you came for, the third song is definitely that. Across The River has a completely different vibe for about a minute until the chorus. “Lonely time” is the lyric I’m on about. The music behind it, especially the riff (love a riff) is what lets you know that this is Victorian Dad; mandolins for days. Quick note: the vocals on this one sound very Red Hot Chili Peppers, just saying.

One of the things I don’t like in music is when a song shares the name of the album title. Like “Help!” by The Beatles or “Blam!” by JME. Makes me feel bad for the rest of the songs, like favouritism or something. So going into Thin Thread I was a bit suspicious. It’s not as alternative as the rest of the album (apart from the distorted accordion). The killer guitar at then end is dope.

If you’ve seen Pulp Fiction you’ll know what I’m on about when I say that Oh Life! could easily have fitted on that soundtrack, which, by the way, is one hell of a compliment. I can almost imagine John Travolta shooting up while this song is on. I think this song is definitely my favourite on the album. 10 points for the “da-du-da-du-da-duda” at the end as well.

How Do You Do Sir? has an Irish gypsy feel (no offence, well, actually I don’t care). The shortest song on the album and you can tell, it ends exactly where it should.

Old Coal Town has the task of following an upbeat Irish folk song. It’s hard to do. If it were a double-sided vinyl I’d split the album just before this one. If you’re listening to it, take a 10 minute break before you go into Old Coal Town, it makes it a lot better. The guitar on this song is beautiful; I definitely underrated it the first time I listened to the album.

Connection shows off Rybka’s voice even more. I know I keep going on about it but it needs mentioning. The electric guitar on this one is perfect. It blends in about 43762 different genres of music. Slight exaggeration. It’s honestly amazing. I think it’s the mandolin on this song that makes it though. Well done, Yates.

Two Steps was stuck in my head all night. It’s the riff again. Whichever member of Victorian Dad is writing the riffs deserves a medal, seriously. It’s one of the weaker songs on the album though. It should end before it picks up again about 2/3s of the way in. This was the only song on the album where I started thinking, “is this song still going?” It’s just a bit long.

If you like space rock then you’ll enjoy Push & Pull. Only for like 20 seconds though then the song changes quickly. This song is like 5 songs in one. Maybe that’s why it’s called “Push & Pull”. At one point, I thought aliens were contacting me. Not a bad thing. After the alien invasion, though it goes all space rock again which is pretty chill.

Travellin’ On is also chill. Occasionally it gives you a kick though. I love a song that tells a story so props to Rybka for writing this one. By this point in the album it’s even harder to put into words what exactly it is that you’re listening to. It has a different feel to earlier songs on the album. It’s one of the best on the album though. Maybe it should just be placed differently. I actually quite like this song as the closing track.

When I first listened to the album, I didn’t like Decay. Not because the song isn’t good (it is). I just thought that it didn’t really work as a closing song. But it totally does. It’s a powerful song. It definitely leaves you wanting more (which is my number 1 rule for closing an album). In fact this is the only song on the album that I wouldn’t mind going on a bit longer. 10 points for the drone at the end.

My only real beef with Victorian Dad is that they tend to let songs go on a bit too long. The album, at 58 minutes, could do with about 8 minutes being cut off. Not because the quality is bad, that’s not what I’m saying. It’s like, say you wrote a song with 4 amazing verses but you only wanted 3, you’d cut one off. With Victorian Dad it’s like they couldn’t decide which one they liked the least so they just left all 4. Music is an art though, and “The Thin Thread” is Victorian Dad’s art so they’re entitled to leave as many verses as they want. That’s where it’s difficult to criticise music. I’m not sure whether the songs are intentionally long or whether it’s a case of not wanting to alter something you’ve made. Either way, I’d cut out a few verses. Otherwise, those riffs that are perfect the first time round quickly become familiar and tiresome.

Aside from that though the album was amazing. A quick tour through their website will also show you just how funny the band members are. I mean obviously they’re quirky but they’re not annoying quirky like that hipster guy with the ironic Pokémon hat.