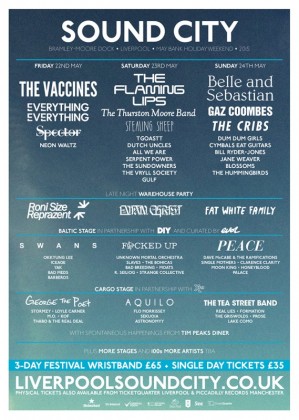 Sound City has evolved. It’s no longer a scattered assemblage of mostly small-scale gigs. It understands that the word ‘festival’ has connotations of mud-covered

drug-addled frenzy, beer in clear plastic cups, and young people flaunting their youth to music that can’t simply be slotted under the term ‘indie’ – it’s a messy concept, but can now truly be applied to Sound City. Last year, the ‘festival’ was a sugary mishmash of gigs taking place all across the city. This year, it was gathered up into one pulsing space filled with confetti and yelps of northern slang, separated from habited areas by a perimeter of water for the safety of the locals. It was good last year – good, nice, fine. This year, it was rad.

The most important feature of this year’s instalment was, of course, the eye-watering line-up. The Vaccine’s flipped their glorious locks onto the main stage, along with Spector, The Flaming Lips, Everything Everything, and other names you actually recognise for a change.

The fact that the festival was able to pull such celebrated artists is a testament to its improvement. The crowd was noticeably less mellow than last year, teeming with man-buns, people who can pull off tattoo sleeves, and teenagers who were surely picked up by their mums after being rejected at the bar.

The venue itself was the most noticeable change. Each individual stage was connected to the next by a string of food vendors, paved with grass and stones along which streams of people ebbed and flowed according to when the good acts started and finished. A sense of vibrancy was evident in everything from the festival fashions of those attending to the music circulating through the system of enormous speakers to the different sensory stimuli being shoved through the air by the masses of moving bodies.

The faint voice of Frederick Macpherson, a hint of the smell of German hotdogs, the light-hearted shoving of people wanting to get to said hotdogs – it was truly an authentic festival experience. Scummy Coachella, one could say.

Each act surpassed themselves, as expected, and the event can be called nothing short of a success, even if it did have to sacrifice some of the peaceful quality of previous years to accommodate its colourful growth.

If such a metamorphosis could take place in one year, it’s anyone’s guess how it will look when it sprouts from the ground next year.

You can grab your early bird wristbands now for 2016 > www.liverpoolsoundcity.co.uk/