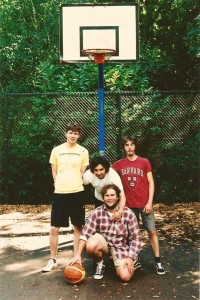 thoughts, that being a music reviewer is all about opinion. I hold no God-like reverence and a divine message that the waiting masses will adhere to, no it’s just my opinion on the music I am fortunate to be in a position to hear and write about.

I’ve already taken the hint from Karlos’ review of the Second Day of Sound City 2014 that the Hooton Tennis Club were awaiting my thoughts on their debut release ‘I Was a Punk in Europe (But My Mum Didn’t Mind)’, but never let it be said that I was swayed by comments such as “nice” and “happy snake”, nor did it want me to beat a path to the door marked – lets be clever and contrary.

To be honest ‘I Was a Punk…’ is a real mixed bag, akin to Bertie Bott’s Every Flavour Beans (Harry Potter reference for those wondering what I’m on about), with the opening track ‘Kathleen Sat on the Arm of Her Favourite Chair’ tasting of earwax.

I’m a bit of a sucker for an opening track that grabs you and places you firmly at the heart of the sense of musical being, but ‘Kathleen Sat on the Arm of Her Favourite Chair’ is to quote the press release “sloppy”. It’s lo-fi and pop spiced, but with the disappointment of lyrical content that feels clichéd ridden alongside predictable musical resonance. I am taken back to the 90s and not in a good way, like a homage to something you thought best left in the cupboard to fester.

‘Much Quicker than Anyone but Jennifer Could Imagine’ follows quickly in line and keeps this lo-fi pop notion firmly at the front of the mind and fails to deliver even the meanest of smiles. However, thankfully all isn’t lost as ‘I’m Not Going Rose’s Again’ suddenly finds the magic key, a moment that suddenly elevates Hooton Tennis Club into the trash-indie psychedelic steps of Sonic Youth and The Velvet Underground. It is a moment worth, unexpectedly, waiting for as its jangly guitar opening promises little, but eventually delivers a real moment of yearning. The vocal delivery is all spiteful as the guitar creates a lifting and soaring canvas from which the track shines its brilliance.

The final offering on this four track offering is ‘….And then Camilla Drew Fourteen Dots on her Knee’, which continues to run with the baton handed down to it by ‘I’m Not Going Rose’s Again’. The vocals all disinterested as the rest of the band, mantra like, repeat a covering refrain. Drawing you in both musically and lyrically ‘….And then Camilla…’ is a hopeful ending of something just a little bit special.

Despite the somewhat stuttering start, there is something in Hooton Tennis Club that requires some attention. One feels that by leading with ‘Kathleen Sat on the Arm of Her Favourite Chair’ the band are planning on a move away from the disinterested vocal drenched offerings of the final couple of tracks and that for this reviewer would be a shame, but far be it from me to be right or wrong, it is after all just an opinion.