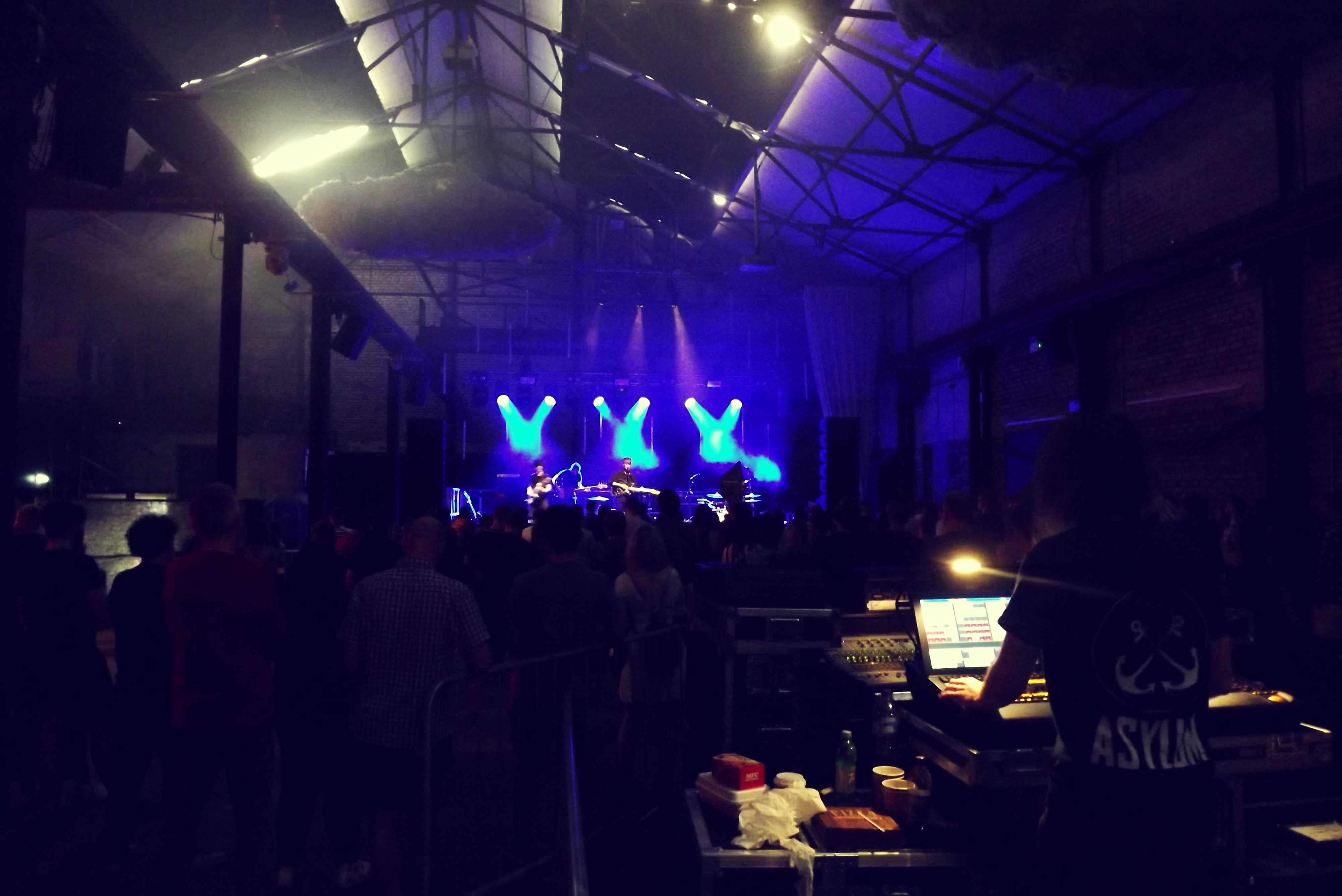 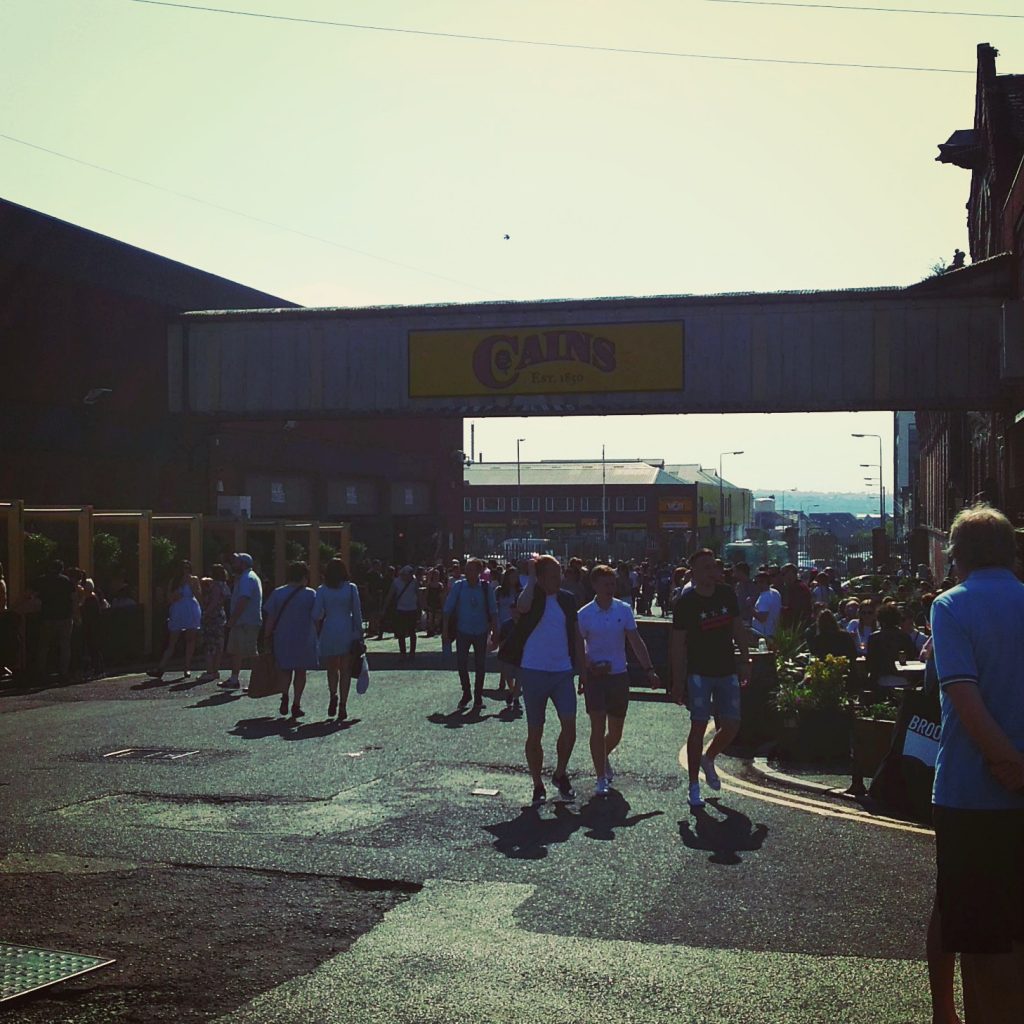 Sound City 2018 hit the streets this weekend, and what a weekend it has been. Firstly it’s a bank holiday (long weekend, whoo!) and the weather was beautiful, sun shining and blue skies. Sound City is a weekend deal, a Saturday and Sunday (+ the Friday conferences) full of musical offerings from home and far.

I couldn’t attend the Saturday, so Sunday was my day, my bag. Having spoken to a few of the Sound City staff whilst collecting my press pass, it seems Saturday was a huge success, very busy and crazy, but Sunday would be more of a chilled affair. That suited me just fine.

This year we have seen a move of a location from the docks back to the city venues (Baltic Triangle and Cains Brewery Village) where it all started (city venues), where in my opinion it was at its best. On arrival, walking down past the venues, it was different than the docks venue, it was already offering different pockets of people and ambiance. I had fallen back in love with Sound City already and I hadn’t even heard a rumble of music yet. The freedom to roam where the hell you like across venues and locations is a critical ingredient to a memorable experience.

I mostly like my music dirty, covered in edges, a few spoonfuls of raw and unhinged expression, for me that’s music. I don’t really want to be patted on the head and have my ears rubbed, I’d rather hear about people’s highs and low’s without filtration. So, I was in a world of joy when I walked into the Baltic Market and was instantly slapped around the face by the wonderful Dish Pit. 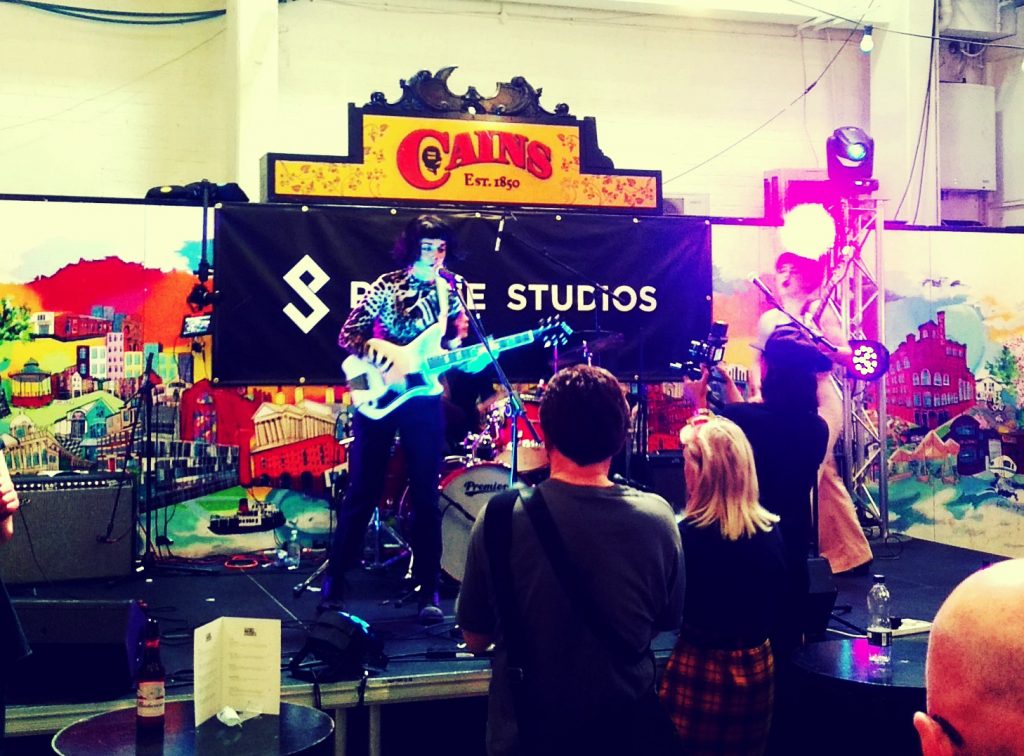 Another offering at the Baltic Market venue, apart from the snazzy food choices and canned beer (on my 4th by now) was a band called The False Heads, hailing from the outskirts of East London, these boys were far away from home, but their performance showed they were more than happy in Liverpool, creating a world of noise and mayhem. They say (who are they?) youth knows no fear, and that has to be said for The False Heads, especially the lead singer who climbed amp stacks, took to the nearby tables and ended the set by diving across the drum kit and drummer. 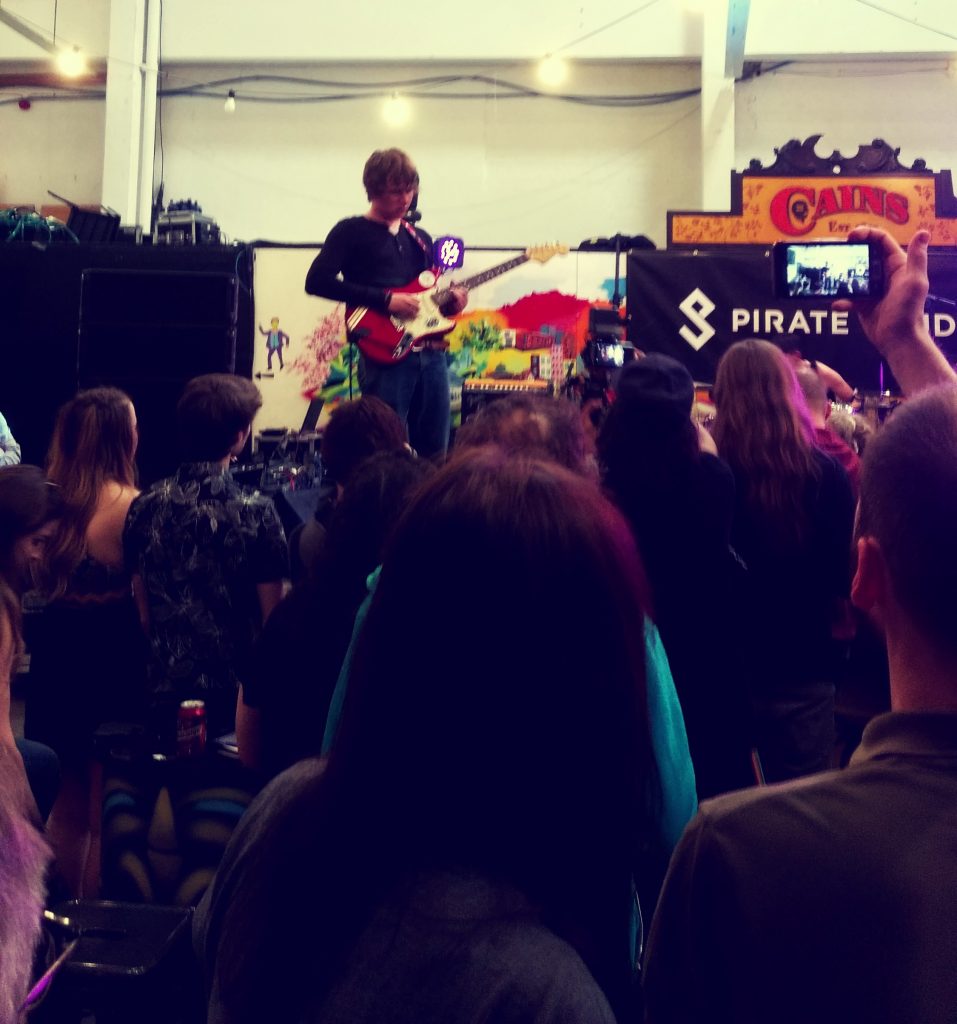 Leaving the Baltic Market to seek out other venues and offerings, my ears were drawn towards a beautiful operatic sound rolling out from the courtyard. Inside I found a little bubble, a bubble of ambiance resonating around the high walls. Gaggles of people sat on benches, sat on chairs in front of the singers, it really was a beautiful bubble. Could this have been staged as eloquently and perfectly in the dock venue? I’d say no, it couldn’t. Each singer taking their turn to project hair raising operatic sounds across the old buildings. A nice moment. 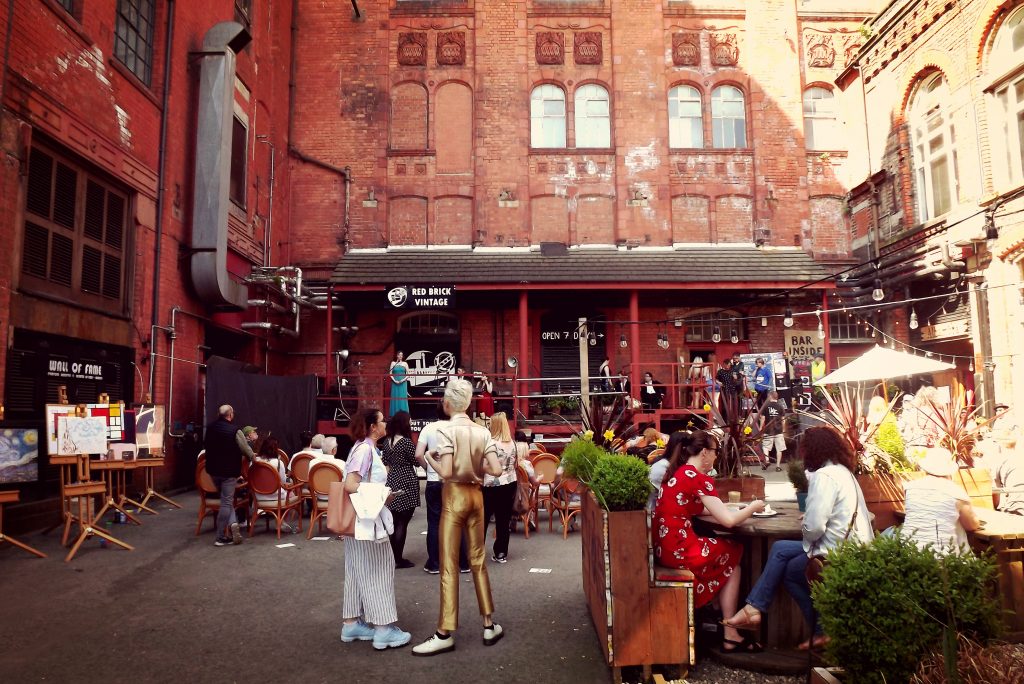 The opera singers at Sound City 2018

Around the corner from The Baltic Market is Birdies Bar. A good numbered crowd had gathered to eat, drink and listen to music in the Sound City sunshine. This is where I caught most of the set by Elevant, another three piece that were hitting the mark with noise, all the feels and a lots of rasp. Driven by a thunderous drum and bass combo and a lead singer that was full of vocal and armed with a guitar, this band rocked the rafters. I loved Elevant, they pressed my buttons. I loved that I stumbled across them, and I also love Sound City for letting that happen. 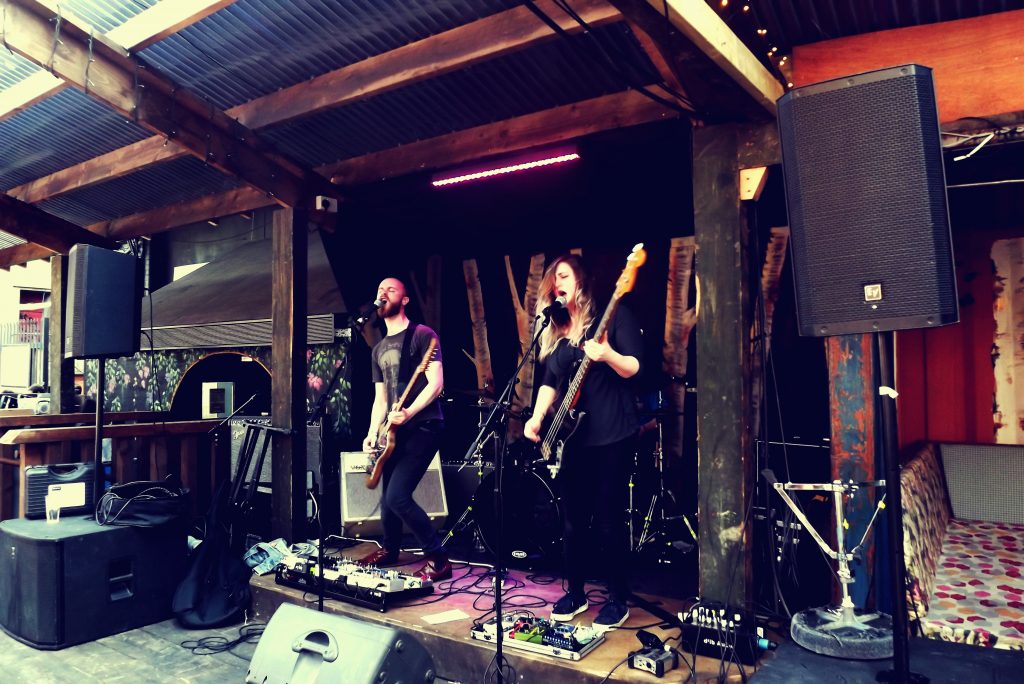 After navigating the Bongo Bingo queue I entered the Camp and Furnace venue. A perfect venue to showcase music in an industrial sprawl, capturing sound quality, lighting and view spots for the audience. I caught the last few songs from a band called Boycie (that name could be wrong), a really big sound with lashings of Radiohead. 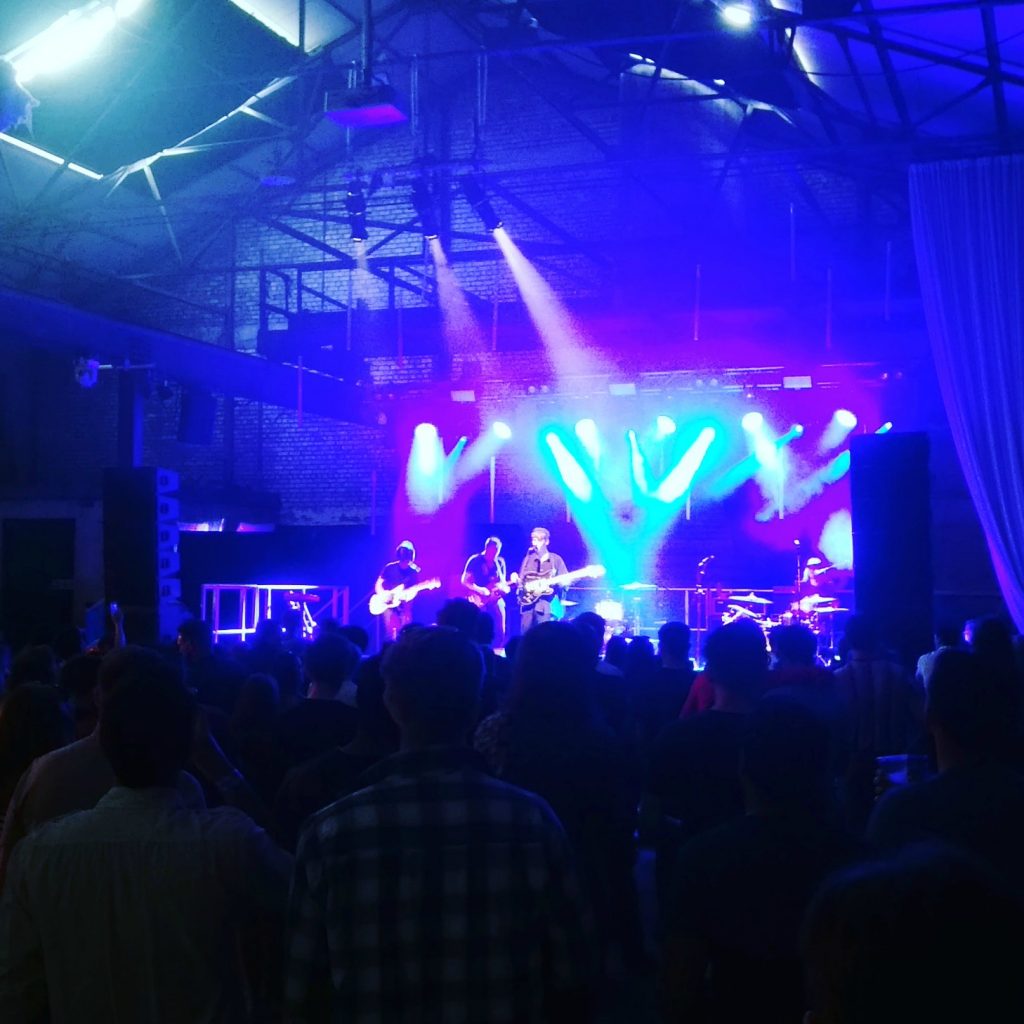 I bobbed in and out of most of the Sound City venues. Constellations Garden was a delight in the sunshine, packed full of gig goers taking in the fine music from the garden stage. Inside Constellations was equally as vibrant, dark and mostly a cloud of loudness covered the viewing public. In some contrast, the Blade Factory took away the sunshine and replaced it with winding steps and an upstairs blackened to the hilt, the stage area gleaming like a cinema screen. Great venue, first time I have been there and I shall return.

Was Sound City 2018 a success? From the slice I experienced on the Sunday, I would say a resounding yes. Everyone will have their own Sound City story, mine was a journey of musical tastes, venues that the city should be proud of and a huge relief that I have my Sound City back.