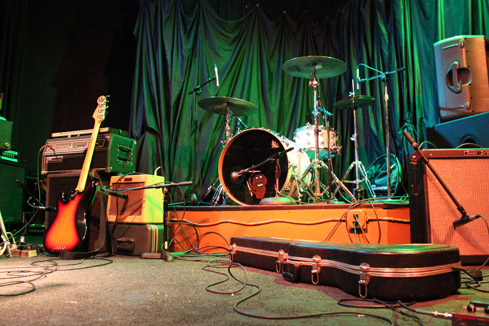 be hit and miss when it comes to audience numbers. It seems an age old story of bands playing to small numbers, venues and artists receiving very little in the way of profit for performing and opening their doors. It can even be seen across a weekend; if there isn’t a profiled band playing or if a gig hasn’t been promoted very well, you can often find yourself standing in a half filled room, with any atmosphere being sucked out by the large vacuum of venue floor.

Sometimes passing foot traffic can be turned off by door prices for an unknown band, why should someone pay for something they haven’t even heard yet? Would a person be more tempted to step inside a venue if entry was free. If the approach was different, how about going in to see a band for free and then paying on the way out. Not a set payment, but payment against how good you think the band and venue had been that night. We see a similar set up on the likes of http://bandcamp.com/tag/pay-what-you-want, an artist can make their sounds available for download and people can ‘pay what they want’ to download after listening.

At the moment most venues and bands receive very little profit or payment ( in most cases bands get nothing at all ) so maybe being one of the first venues to take a different approach would not only raise awareness of the venue but actually get more people in. If a person has enjoyed your set, had a few drinks and a good time, I would imagine they would be more than happy to drop money into a door bucket on the way out to show appreciation. How that is split between venue and band is a different conversation, but one thing is for sure, something has to change.

Open Mic Night – Good or Bad?
What is Punk?