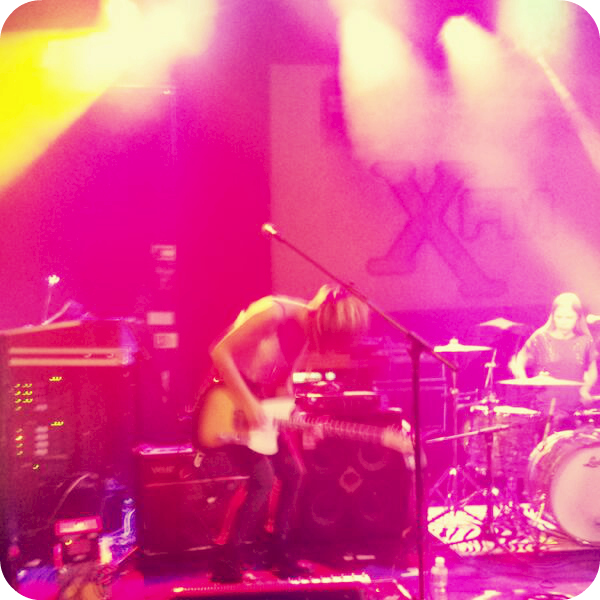 There is something great about running an independent music blog/website 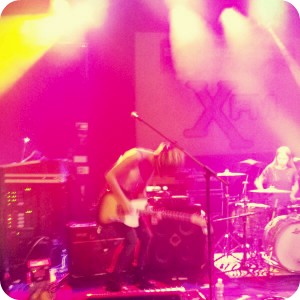 #callitwhatyouwant. We can pick and choose who we want to go and write about. We have no obligations to go and review the headline acts; there is no hierarchy to appease. We are indeed a free spirit and long may it remain. Tonight I headed over to EVAC (East Village Arts Club Theatre) on Seel St in the city. Would I be going to review Jimi Goodman (ex Doves) who was playing at the venue or maybe popping out to go see Kodaline at the Liverpool Cathedral? No we figured there would be enough reviewing moths flying towards those light bulbs. Tonight I was here to check out some of the international female representation here at Sound City 2014

First up in the EVAC theatre was September Girls, a Dublin based five 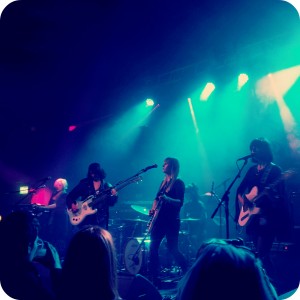 piece band consisting of keys, bass, drums and guitar. ‘September Girls’ is a Bangles tune from the 80’s, so is that what the waiting audience was going to get? No. From the off any lingering doubts that it would be a 30 minute Banglish onslaught was washed away with an overwhelming lushness of warm sound and vibe. Garage Pop, Dark Candy Pop, Fuzzy Pop? Hell to be honest lets make up a new descriptive term for the sound of September Girls, DarkCanfuzz Pop. However you wish to describe their sound you can’t help but love the vibrant hooks and verses. Melodic harmonies throughout the tunes lounge lazily across the doubled up guitar chords and skipping rhythm. I want to be in a fast car with the hood down, sunglasses on and wearing a t shirt that says bite me. I’m not, but I have the 2nd best thing; I’m watching The September Girls. Check them out: http://septembergirls.bandcamp.com/

On stage next were a band from Toronto called The Beaches. A 4 piece set 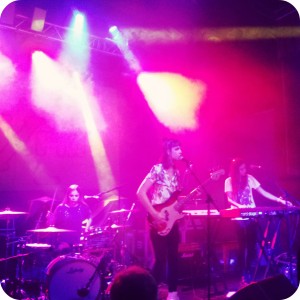 up with keys, drums and guitar. Any warm fuzz that was still clinging onto my body from the previous set was instantly ripped off, my hair pulled and face slapped with a scream of OI! down my ear. The Beaches didn’t hang around and showed us all instantly what we were going to get. Power hooks, driving beats all mixed in with a musical growl. Although The Beaches are very much a band, they are also a collection of individuals. Let me explain that. Sometimes when watching a band there can be a focal point, a mysterious lead singer; a bass player who has a hypnotic dance. There is something normally that your eye is naturally drawn into. The Beaches have lots going on, a lead guitar who from the first song was head down and into it, a drummer that looks like she would drum forever, would probably go off stage after the set and carry on drumming. A keyboard player who just looks in control of what she is doing and hasn’t got her head bowed down over the keyboard and a lead singer/bass who just fronts up everything so perfectly. Energy at the right times and vocally perfect for the sounds the band are producing. I loved ‘Loner’ (video below) I think that this song pretty much sums up what The Beaches are all about, attitude with hook and snarl. The band have a new EP out on the 5th of May called ‘The Heights’, I will be buying it and so can you > http://www.thebeachesband.com

For the next band I wanted to see I had to head up into the Loft at Evac. I 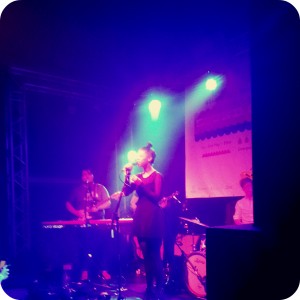 have been in the Loft area a number of times when it hasn’t been very full and it can sometimes feel ’empty’. On arrival it was indeed very empty; but the band were just setting up and there was time before the performance started. The band in question are PHOX from Baraboo, Wisconson. As we came closer to the band starting their set a nicely numbered crowd had formed around the stage area waiting to hear what PHOX had to offer. I’ve been lucky enough over Sound City to discover some real great bands, totally by fluke and fortune and it was to happen once again. Maybe it was the fact I had left an hours worth of loud and energetic music in another room, but as soon as PHOX started their set I was all ears, like a hypnotist clicking his fingers, I was under the PHOX spell (am i that easy). The band consists of 6 members, rhythm, keys, banjo but create a sound that is so intricate and perfectly woven into the what can only be described as beautiful vocal. It’s a crystal clear vocal, smooth swift changes that dance around the crafted lyrics. Supported by great backing vocal, the PHOX sound instantly created one of those intimate gigs that every gig goer craves. If you want to be beautified by music listen to PHOX. I want to be woken up everyday by the sounds of PHOX; you need them in your life. http://phoxband.com/home/